"Rich in humor and human insight, including real detection along with views of a happy marriage and the joys and frustrations of the writing life."

Leopold Longshanks (“Call me Shanks.  Everybody does.”) is a mystery writer.  He will admit, with a certain resentment, to being in his early fifties.  He’s famous in his field, but fortune has not followed as briskly as he thinks it should.

He is married to Cora, whom he loves dearly.  Cora has recently started writing romance novels and is perhaps more successful than Shanks, which doesn’t bother him at all.  Really.  Really.

Shanks occasionally finds himself involved in solving crimes, which irritates him.  (No surprise there; Cora says everything irritates him.)  He loathes the possibility of becoming famous as “a mystery writer who sleuths in real life!” so he dodges opportunities whenever possible.

Eight of Shanks’ stories have appeared in Alfred Hitchcock’s Mystery Magazine.  All of those, plus five more can be found in the book Shanks on Crime.

See the bibliography for a list of the Shanks stories.

"A wonderful collection of short stories starring a serial detective-of-circumstance who solves minor crimes and misdemeanors with his sardonic wit and humor."  -Rudolph Schmidt, The Digest Enthusiast.

"All the stories are clever, witty, and well-written... If you haven't met Shanks before, this book provides an excellent chance to get acquainted."
- Bill Crider, Mystery Scene Magazine

How to Buy my Books. 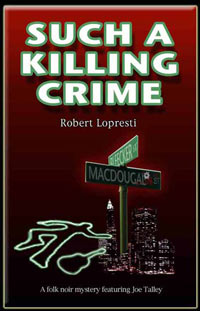